We had been travelling on a wide, smooth, lightly travelled route through gently rolling countryside, when suddenly the road swept down into a lovely valley, across a river and up the other side.  The cattle grazing on the green banks raised their heads to watch us pass.  It was a delightful surprise, but then, the whole weekend was full of nice surprises.  Garry and Annette Potter, the organizers, had gone all out to incorporate unique details and great hospitality.

The surprises started at check-in, where Annette handed us a tour bag (re-usable, of course) that contained, among other things, a bag of cookies and a spray can of Tremclad paint!  Feeling a bit peckish after a long ride in the truck, we dove right in to the cookies, but I did resist the temptation to freshen up some spots on the undercarriage of my T with the paint.  That was our first indication that Garry is the King of Free Stuff. 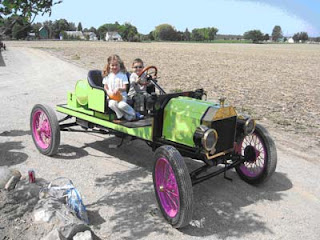 There was an optional tour into Goderich that afternoon and evening, and it was on that lovely little run that we started to see some of the many cars and people in attendance.  The tour was open to members of the Ontario regions of both the HCCA and the Model T Ford Club International, which made for a big turnout of 54 cars and 140 people.  The future for both clubs looked particularly bright with 22 of the participants being under the age of 18.  Two of the teenage girls were driving their own cars!

That evening, everyone enjoyed a wine and cheese party in the Potters’ suite in the Mill Manager’s House at the Benmiller Inn, where there was an abundance of nice cheeses, home baking, refreshing beverages and lots of other treats.  Next morning, after a substantial breakfast at the Inn, we headed off on our tour.  It should be noted that the only confusion in tour directions was found in the very first instructions for getting out of the parking lot.  In fairness, the problem was caused by some last minute road work that had blocked off the usual exit from the parking lot.  Otherwise, the tour directions were impeccable throughout the weekend.

At our first stop, Bayfield, we were allowed to park on the village green where we were also treated to our first free lunch, hosted by the local Lions Club.  Some people wandered down the quaint main street and browsed in interesting stores and took advantage of free ice cream cones, but I spent most of my time watching cars come in, and shooting the breeze with friends old and new.  Our cars made a most impressive sight, enjoyed by the locals as well as people who were in town for the day.  There were many Model T’s that I hadn’t seen before, and several HCCA cars were on their first or second time out.  One that attracted a lot of interest was the huge 1912 Rolls Royce Silver Ghost, which carried several generations of the Longfield family in fine fashion.  Eric and Linda Edwards were driving their stately 1906 Studebaker, and Sarah Zimmer’s green and pink T speedster caught everyone’s eye.

Rory McIntyre had a permanent smile on his face as he drove the flawlessly performing 1909 EMF for the weekend.  This great car, retrieved many years ago from the Pollard collection by our own Glenn Baechler, features the original expanding ring clutch which is almost always replaced when an ’09 is restored for touring.  It sure looked smooth to me, a credit to Rory and his Dad, Peter.  Another rare car that made the tour in fine fashion was Roger and Eleanor Hadfields’ 1914 Huppmobile.  It must also be noted that it was first time out for Jeanine and Mark Eakins newly restored (and rebodied) 1911 T touring.  Jeanine bought this car a number of years ago, with a tourister body on it.  Over the last couple of years, her Dad, Stan Passfield, bought a new touring body and reconfigured the car.  With paintwork and rear fenders by Peter Fawcett, it turned out great, and it ran like a watch all weekend. 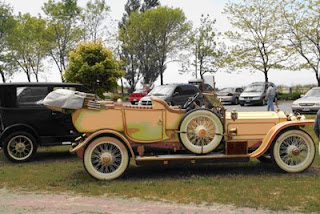 The Longfields’ Silver Ghost attracted a lot of attention

After lunch, we were off to Grand Bend where many of us had theatre tickets for a performance of Oliver.  Susan and I love musicals, and have enjoyed other productions of this old classic, but felt this one was the best one we had seen, made even better by the fine seats that Garry had booked right in the centre of the orchestra level.  Then it was back to Benmiller for a barbecue in the nearby campground where a number of the Model T group (and a couple of HCCA-ers) were staying.  It was an evening to remember, with excellent food, a four piece country and western band,  and a tribute to the Century cars which were on the tour.

With cars from 1909 being eligible, we are into the Model T years, so there won’t be any lack of cars to honour for the next while.  The Hadfields brought their 1907 IHC, which received its award in Cobourg two years ago.  Rory McIntyre presented plaques to Tom and Janet Huehn for their 1909 Ford tourister, to Tom Stewart for his 1909 Ford touring (this is a Canadian production car that Tom has owned for about 60 years!), to his dad, Peter, for the EMF, to the Edwards’ for the Studebaker, and finally, to Bruce and Eleanor Greeniaus for their impressive 1909 Oakland touring.

Unbeknownst to Bruce and Eleanor, there was a little more in store for them that evening.  Their daughters Sarah and Laura, with their spouses and kids, were all on tour.  Laura’s family lives in Taiwan, so it was a big thing for the whole family to be together.  Added to that, the Oakland turned 100, and Bruce and Eleanor are celebrating another milestone, their 50th wedding anniversary.  The crowd gave them a big ovation, and their family had a beautiful picture of them and the Oakland.  Later the band played a “first dance” for them, so it all made for a memorable evening. 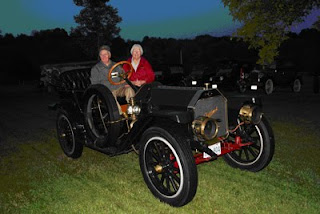 The Greeniaus’ Oakland turned 100, and Bruce and Eleanor are celebrating their 50th

Getting back to free stuff, we must mention door prizes and other gifts.  For starters, each young person received some pretty nifty things, dolls for the girls, toy trucks for the boys, bubble makers…. all great fun for the newest generation of old car tourists.  Then there were the door prizes: umbrellas, oil, a rebuilt T starter, and even a free night at the hotel.  Susan and I won the free night, which translated into a very economical weekend for us!  I also won a jug of oil, so perhaps it would have been a good time to buy a lottery ticket.  Well, I passed up on that opportunity, but we are very appreciative of our two fine prizes.

Next morning, it was back to the buffet table for another good, solid breakfast before we headed off to points north.  First stop was at the home and garage of Bill Channey in Auburn, where we viewed his fine collection of Ford products, including some very nice cars and trucks.  Being a Model A owner once again, I was happy to have the chance to view some good examples of the marque, and also vehicles from the later thirties and beyond.  Everything was neat, clean and well displayed.   From there, we could also walk to see steam engines owned by Bill Andrews and Jim Schneider’s mobile antique display Further along, in Dungannon, we stopped for coffee, doughnuts and other treats at the home and private museum of George and Barb Smyth, collectors of all things Massey Harris.  I had no idea there could be so many different versions of M-H tractors and implements.  Sometimes I think that having three antique cars is one too many, so seeing such a huge collection was mind boggling.  The Smyths really rolled out the red carpet for us, and they had invited the community to drop in while we were there.  Later that day, the Passfields, who were running perilously low on gasoline in one of their cars, dropped in to see if they could get a bit of gas to tide them over, and found the party still in full swing. 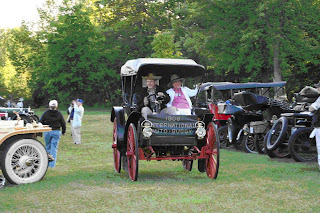 The Hadfields brought their IHC

Being one of the first to arrive at our lunch stop, we once again had the chance to watch the other cars arrive.  Garry had arranged for yet another free lunch, this one served from a small refreshment stand in the waterfront park courtesy of the Rotary Club.  I think our visit was well publicized, as there were many spectators around to see our cars.  By the way, there were donations made from the tour funds to the Bayfield Lions and the Kincardine Rotarians;  it’s good to know that our hobby gives back to the community.

All too soon, it was time to head back to Benmiller, but there was another nice little surprise along the way:  a complimentary ice cream stop in the town of Lucknow.  While enjoying my treat, I was interviewed by a young man from the local newspaper, who turned out to have been a student at a school in Owen Sound when I was vice principal there.  (He wasn’t a Frequent Flyer in the office, so I hadn’t known him well.)
By and large, all the cars ran well, and the weather was quite acceptable (another surprise in this cold rainy spring we’ve had in these parts).  The roads were in excellent condition and lightly travelled.  Susan and I also had the pleasure of having friends ride with us.  Bill and Marion McLean’s cars aren’t old enough for the HCCA, but we’re hoping they will be inspired to move in the right direction.  Bill had driven a Model T briefly many years ago, and with only a bit of coaching, he got the hang of driving our car.

So major kudos go to Annette and Garry for putting together such a pleasurable weekend, full of great little surprises and nice touches.  What a great way to start our touring season with the HCCA!